Sharing stories, experiences and success stories is always very valuable, especially when starting out with AAC (Augmentative and Alternative Communication). Joke Van de Pol likes to share the road she and her family have travelled with AAC and SCORE from the beginning until now. In doing so, she hopes to help others who are at the beginning of that road.

“Our little son, Vic, is 6 years old. He has an intellectual disability and, due to motor difficulties, cannot speak intelligibly, or at least barely. In the spring of 2019, we noticed that Vic started to feel the need to communicate. We made an appointment with a specialist centre and all available communication tools were presented and explained to us there. They also did a small test with Vic which showed that Vic could handle quite a few symbols on one page. He could immediately pick the right one when asked. Well-informed, we went home and let it sink in, together with our speech therapists. We unanimously decided that SCORE seemed to be the best option for Vic. So we went ahead.

We chose to use the A3 wall paper from SCORE with only 1/3rd of the cells filled, the rest was hidden. We made it with the trial version of SCORE. We looked at where Vic’s interests lay and anticipated this. For example: when he was playing with cars, we modelled with him: his name, mummy, daddy, open, close, stop, help, angry, happy. We also hung cards all over our house: living room, hallway, toilets, bathroom, bedroom, by his changing table, etc. After a while, we made fringe vocabulary adapted to the room or space. We went all the way! Some examples: on the door, we hung the symbol of ‘door’ and also ‘open’, ‘close’, ‘day’. On the oven, we put “warm”, etc.
Just to make it clear: Vic was surrounded with SCORE. And when I look back on it, it was very easy for us as well, by investing a little and sticking everything together, we always had a card within reach. 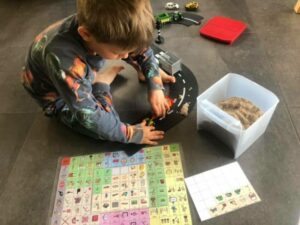 I am also going to be honest: it is intense. You know how important it is to model, but it requires a lot of energy. Probably you don’t always feel capable of handling everything… Because if you are dealing with AAC, there will probably be extra worries too. Not to be underestimated! So we tried to make it as easy as possible for ourselves.

At school, I made an A4 board for each corner the kids play in, adapted to the toys there. So Vic always had SCORE with him there as well. For the class teacher (then still in regular education) it was difficult to support Vic with SCORE.
1. It is not easy in a classroom with 20 children and having to deal with AAC as well.
2. She did not believe that Vic would be able to do this because he was barely pointing to symbols by himself.
We had to hear several times: “I don’t think that will work”. And “Vic will never be able to do that”. Sometime later, Vic switched to special education. 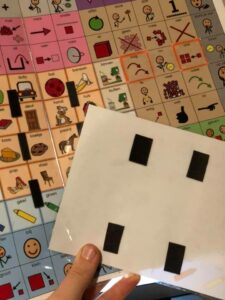 By that time we had been modelling for half a year, the A3 wall paper was completely filled with symbols and Vic started to indicate the first words himself. At home, he always seemed to be one step ahead than at school or in speech therapy. And then came COVID-19 and the first lockdown.

We were at home for 3 months, no school, no therapy. During this period, the speech therapist at the rehabilitation centre taught me the tricks of the trade so that I could keep Vic going at home. We played extensively together with Playmobil, we baked biscuits, we made milkshake and while we were at it, we modelled as much as possible.

During this period that Vic was home full-time, he almost completely stopped using SCORE, the interest was completely gone. Why? I do not know, but I think it was because he realized that he did not need it as much at home. He knows that, although he can hardly understand himself, we understand him at home. So I feared that everything we had built up would be lost again.

And then in September, back to school. Vic’s interest in SCORE returned. It clearly helps him when it is used in several places. We gradually got sight of the delivery of our communication device and we all felt it was time. Vic wanted to tell more than he could with the A3 wall paper. At school, they also started to use it brilliantly. 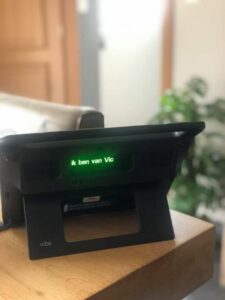 Mid-December our Vibe was delivered and we were astounded as to how well everything is going! Vic is now learning to categorize and he is succeeding. Slowly and with a lot of patience. But we have patience. Especially when we see where we are coming from. Just fantastic! At times Vic is clearly exploring, he presses on all sorts of things, very often the same, but even during these moments, I see that he is learning. I often notice that afterwards, he has remembered where things are approximately. Vic is weak in fine motor skills, so he very often indicates something wrong, but never to worry, he hears that it is wrong and just tries again. He only stops when he is able to indicate what he meant. So we continue to do so and enjoy every step we take with AAC!”

Feel free to share your own story with us, who knows you might also be helping someone through the difficult start! 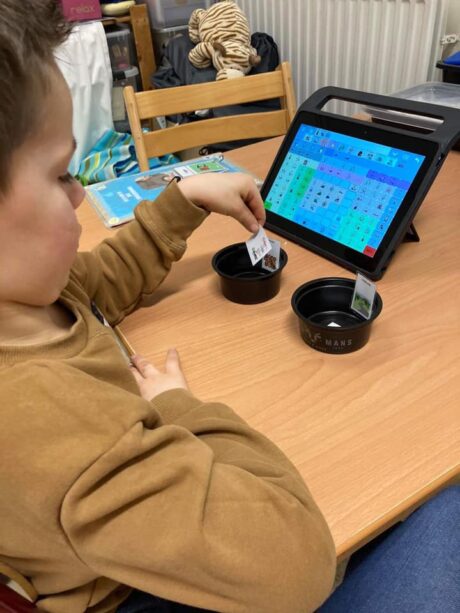